The patient came via detours from South Africa to the Centre for Biological Dentistry with the aim of removing his titanium implants and replacing them directly with neutral ceramic implants.

If possible, he wanted to leave the practice fully edentulous.

The clarification and communication took place in advance, using a digital OPG and exclusively by email. For the patient was the main concern the optimal health and since he had lost a lot of vitality and power in recent years, it was important for him to look for the reasons. His general practitioner, a well-known integrative physician, found him to have a strong electrosensitivity.

In biological dentistry, every metal in the body is regarded as a kind of antenna for microwaves and other electromagnetic fields (EMF). According to the WHO (2011), the use of a mobile phone alone can be carcinogenic and can be found in the same category as car exhaust gas, chloroform and lead. In addition, there is the increasing electrosensitivity of patients due to the exponentially increasing spread of microwaves through WLAN and mobile radio.

The antenna effect creates tension fields that sensitively interfere with the central nervous system. The standard absorption rate of electromagnetic fields can be increased 400-700 times simply by using a mobile phone (ringing or SMS reception) in combination with metals in the mouth (2).

According to Dr Pascal Eppe, the five most common symptoms of electrohypersensitivity (EHS) are confusion, forgetfulness and poor concentration, fatigue and general weakness, headache and tinitus, chest pressure and heart problems, and itchy, burning skin and rashes. In a Fujii clinical study, patients with titanium implants experienced balance problems due to the amplification of electromagnetic fields by dental titanium implants (3).

An 48-year-old male patient, in addition to the electrosensitivity diagnosed, the inflammatory parameters in the blood as well as the cortisol level were increased, which speaks for chronic stress.

Since the diet and other proinflammatory triggers were inconspicuous, it was close to finding the cause elsewhere in the body.

Typically, the body or immune system reacts to a chronic stimulus with an increased production of inflammatory parameters and anti-inflammatory compensation mechanisms in the hormone balance (cortisol is increasingly released – stress hormone).

Also the testosterone level of the patient was clearly too low. All adrenal hormones are synthesized from cholesterol. Progesterone and pregnenolone are used to produce the sex hormones testosterone and estrogen on the one hand – and cortisol on the other. Chronic stress leads to the so-called “Pregnenolone Steal”. More cortisol is produced from Pregnenonlon and the sex hormones disappear because there is not enough raw material left for synthesis. In the long run, this can lead to adrenal burnout (adrenal insufficiency) (4).

There were slight clinical signs of titanium intolerance and minimal periimplantitis. Particularly in region 25, the peri-implant tissue was clearly swollen and responded to probing with increased bleeding, as was the case with the other implants.

According to Dr. Volker von Baehr (IMD-Berlin), 15 to 20% of the population already react incompatibly to titanium (5), mainly triggered by the mass use of titanium dioxide as a filler or dye in medicaments, food supplements, body care products, cosmetics, chewing gum and toothpaste. The tissue-specific scavenger cells react to the titanium oxide particles produced by abrasion when the implants are inserted with an increased unspecific immune response. This leads to increased oxidative stress (6-7). In a study by Weingart, titanium oxide particles were found in regional lymph nodes (8). The lymph and immune system is thus additionally burdened. Participation in the development of autoimmune reactions is also being discussed (9). Radar et. al. were able to show that zirconium oxide particles of the same size do not induce an inflammatory immune response (TNF-) in a macrophage culture medium (10).

The logical conclusion was that the patient needed a completely neutral material to replace his titanium implants.

For the reasons mentioned above, it is understandable that in the course of consistent biological dentistry all metals should be removed from chronically ill patients in order to relieve the immune system on the one hand, but also to reduce microcurrents and interactions with electromagnetic fields on the other hand.

At the beginning of April 2015, the patient came from South Africa to the Centre for Biological Dentistry for the forthcoming operation.

Prior to the operation, operation-relevant data were clarified, in particular which implant system was involved in his case. In regions 16,25,26 ANKYLOS implants were in situ, regions 15 and 24 were treated with NobelActive implants.

At the preoperative DVT (Morita) the planned explantation and implantation was discussed with the patient. Clinically, an esthetically compromised bone and soft tissue situation was observed. Functionally, the patient did not experience any problems despite the reduced and sometimes even completely missing attached gingiva. Since the posterior tooth area was completely in the non-aesthetic area, a connective tissue graft or other reconstruction measures were not desired. The author reserved the right to use a tissue graft to support any functional problems that might occur in the area of the movable mucous membrane.

14 days before the operation, the patient started with the Bone Healing Protocol (BHP n. Dr. Nischwitz) to optimally support his body with the right nutrients for bone regeneration and wound healing.

Immediately before the operation, blood was taken from the patient to produce a plasma membrane PRGF -Endoret.

Explantation turned out to be extremely difficult, as the two NobelActive implants could neither be removed with the BTI explantation tool or with the Fixture Removal Kit from Neobiotech (South Korea). The remaining three ANKYLOS implants were each removed with a torque of approximately 250 Ncm. The two NobelActive implants were removed in painstaking precision work using extraction attachments from the Mectron Piezosurgery device with maximum protection of the bone. Otherwise, immediate implantation with ceramic implants would not have been possible.

Immediate implant placement was then performed in the resulting explantation sockets regions 16,15,24,26. Since the old implant region 25 had been placed completely outside the alveolar ridge, prosthetically inadequate, a new hole had to be drilled for the new ceramic implant. Since a sinus lift was out of the question for immediate restoration, the ceramic implant was placed eccentrically angled along the medial maxillary sinus wall. SDS ceramic implants allow an axial deviation of up to 25 degrees by direct grinding without any problems.

The SDS ceramic implants in root design (SDS RD ATZ), which are also available up to a diameter of 5.4 mm, were used. These were all inserted with the same primary stability torque of approx – 35 Ncm. Only in the range 15 and 24 a holding seam (PTFE) was used.

The SDS zirconium implants were prepared with rotring diamonds and the axial deviation corrected.

Despite the long duration of the operation, the patient had no pain or swelling on the following day.

After a healing period of three months, the ceramic implants were exposed and finely prepared with red ring diamonds using the example of a natural tooth.

An impression was then taken with Impregum (3M ESPE). The temporary restoration was again fabricated from Protemp4 (3M ESPE) chairside and inserted with Durelon (3M ESPE carboxylate cement).

Four weeks later, the final zircon bridges were also definitively placed with a glass ionomer cement (Fuji Plus). During the final occlusion and articulation check, care must be taken to grind the denture in slight infraocclusion (Shimstock foil without resistance) and without any articulation contacts.

This case should show that completely new approaches in implantology are conceivable. It is therefore possible to remove completely osseointegrated titanium implants without a major bone defect and subsequent bone build-up odyssey and replace them immediately with a ceramic implant. In some cases, whether for reasons of electrosensitivity or immunological problems (peri-implantitis or titanium intolerance), it may be necessary to take this step for health reasons.

Immediately after the time-consuming operation, the patient reported feeling “clearer” and much more relaxed. The pressure from his head had disappeared.

In terms of biological dentistry, the author recommends to start with the more obvious therapies, such as removing abutments and superstructures from different materials and replacing them with an individual abutment and crown made of biocompatible all-ceramic. The galvanic element, which is very likely the result of a combination of titanium implant and gold-based superstructure, can thus be effectively removed, which is often already sufficient for the patient’s recovery.

For borderline surgery, as in the present case, an effective surgical protocol is crucial. Zirconium implants pay particular attention to the thorough cleaning and disinfection of the surgical site, because unlike titanium implants, they only heal into completely healthy bone. This protocol includes orthomolecular support with nutrients in advance (BHP n. Dr. Nischwitz), local disinfection with ozone and neural therapy as well as immunological support with intravenous vitamins and minerals (BTP infusion n. VNV). An antibiotic can thus be completely dispensed with.

Also the education of the patient about the postoperative behaviour strategy is of utmost importance. The ceramic implants must not be loaded during the healing phase, as this may lead to connective tissue healing. If this is observed, nothing stands in the way of optimal osseointegration.

For a deeper insight into biological dentistry, the series of seminars by the author Biological Dentistry is recommended. 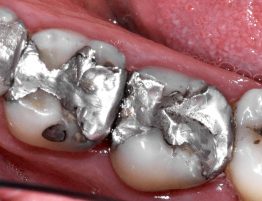 The term interference field stems from complementary medicine and means nothing other than structural change….